50+ Indigenous languages in what is now called Canada continue to be threatened, inspiring language revitalization efforts across the country. Transmissions comes from an Indigenous perspective and offers an affective art experience matched with educational material that can lift up, pay respect to, and raise awareness of the scope and complexity of Indigenous understandings held within language.

One of the foundational ideas of Transmissions is that it provides a platform for cross-disciplinary conversations that can help “knit the world together,” that the divisions inherent in Euro-Western categorization lose the wholeness of the world and divorce us from our connection to and responsibility towards it.

Transmissions invites us to untether from our day-to-day world and imagine a possible future. It provides a platform to activate and cross-pollinate knowledge systems, from science to storytelling, ecology to linguistics, art to commerce. To begin conversations, to listen deeply, to engage varied perspectives and expertise, to find our place within the circle of all our relations.

Transmissions began development in 2015, and in 2017 had a full-house for a preview of Part Two’s shadow city and a live film shoot of Unearthed at the imagineNATIVE Film & Media Arts Festival.

The exhibit premiered in downtown Vancouver at SFU Woodward’s in September 2019, coinciding with the UN Year of Indigenous Languages, and was the cover story of the widely-read publication The Georgia Straight. The film component Unearthed was featured at the Art Gallery of Ontario for Toronto’s Nuit Blanche and was selected by NOW Magazine as one of 10 must-see shows at the event. Transmissions will continue to tour in 2021 and beyond and can be experienced safely with social distancing protocols. 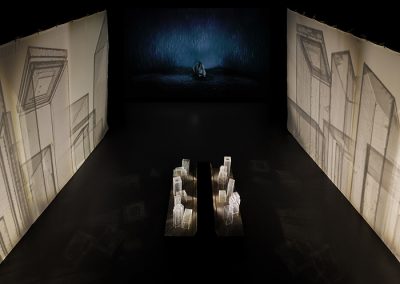 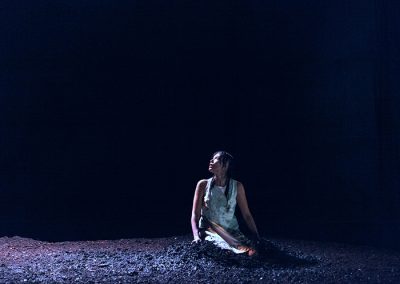 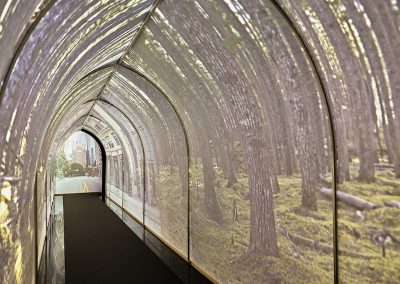 “Transmissions gets inside of you, as much as you are inside of it… her work is imbued with a febrile brand of hope.”

“Jackson wants to unsettle us with her immersive imagery and soundscapes. The beauty of Biidaaban and now its ‘sister project’ Transmissions is that they can be interpreted in so many ways. As a sheer sensory experience, they are beautiful, haunting works.” – The Georgia Straight

“Transmissions weaves together an incredible number of themes and disciplines to look more closely at issues relating to climate change, Indigenous languages and linguistics, forest biology, urban development, Indigenous theory, and environmentalism. Transmissions activates curiosity and invites the viewer to look further and more deeply at the multitude of meanings that exist between us.” – BC Studies

What Visitors are Saying

“Beautiful! Everyone should see this.”

“Captivating, left feeling changed, a new air, an understanding. Second time going through and the longer I stayed, the better.”

“Thank you for making a place where I could spend time, take time, offer time, to better hear and to better see some of the layers between a current state of our world and the way it might be later, or underneath (or, at the same time… still, always). Lots to think about.”

Anishinaabe filmmaker Lisa Jackson is one of Canada’s most celebrated and innovative artists and Transmissions represents a culmination of 10+ years of her work with language.

Lisa Jackson’s work has been exhibited at top festivals around the world, including Sundance, Tribeca, Berlinale, SXSW, BFI London and Hot Docs, has aired widely on television, and been recognized with two Canadian Screen Awards and a Webby nomination. She is known for her cross-genre work spanning documentary, fiction, animation, 3D IMAX and VR. Transmissions is her first installation. She is Anishinaabe from the Aamjiwnaang First Nation and mixed settler and lives in Toronto. See more about her work at doornumber3.ca.