The Roots of Meaning: A Symposium on Lisa Jackson’s Transmissions

The Roots of Meaning: A Symposium on Lisa Jackson’s Transmissions

On Sept. 20th, 2019, Simon Fraser University held a symposium in honour of the world premiere of Lisa Jackson’s Transmissions at the Fei and Milton Wong Experimental Theatre at Simon Fraser University, Woodwards. Lisa Jackson is a multi-award winning Anishinaabe filmmaker and artist. Transmissions is a three-part, immersive multimedia installation that extends her investigation into the connections between land, language, and people, most recently with her award winning virtual reality work Biidaaban: First Light. The symposium was organized by Karrmen Crey (Stó:lō) and Kate Hennessy. A Reading Group resource and a list of readings referenced or authored by symposium presenters can be found here. 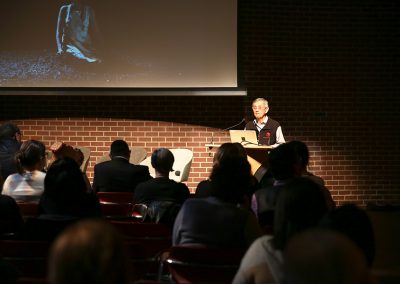 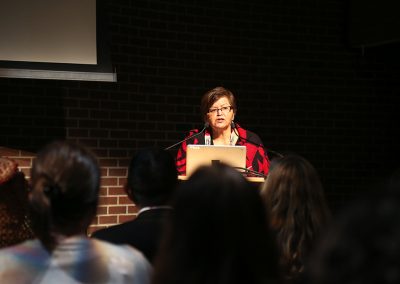 Conversation 2: Indigenous Futurisms and the Anthropocene

“And as our ancestor had done in the past, I raise my hands and welcome to all of you here gathered at Simon Fraser University on the lands of the hən̓q̓əmin̓əm speaking Musqueam people that we share along with our relatives, Skwx̱wú7mesh and Səl̓ílwətaɬ.”

Larry Grant is a Musqueam Elder. He is presently assisting in revitalizing hən̓q̓əmin̓əm̓ in the Musqueam Language and Culture Department, and co-teaching the introductory hən̓q̓əmin̓əm̓ course through UBC. Larry is the Elder-in-Residence at UBC’s First Nations House of Learning. He is a Faculty Fellow at St. John’s College, and the inaugural Honorary Life Fellow for Green College and is the recipient of numerous awards and distinctions.

Elder Margaret was born in Skawahlook First Nation and was raised in Ruby Creek by her grandparents. She attended school on her reserve and graduated from UBC. She has been involved in a variety of events and activities within the Tsleil-Waututh community, where she lives, and is very active in the broader Vancouver community area as well. Margaret is one of the Elders in the SFU Elders Program where she enjoys working with SFU Indigenous students and the broader SFU community.

Chief Janice George graduated from Capilano University, North Vancouver BC, and the Institute of American Indian Arts, Santa Fe, NM. She feels her education at these schools helped her excel as a teacher, adding to her most important traditional teachings. She is a hereditary chief, trained museum curator and educator. George also co-organized the 1st Canada Northwest Coast Weavers Gathering, with other Squamish Nation Weavers. George and Joseph are from prominent Squamish families and have numerous ceremonial and cultural responsibilities in their community. Joseph is the former director of the Squamish Housing and Capital Projects and currently consults on capital projects for First Nations communities. 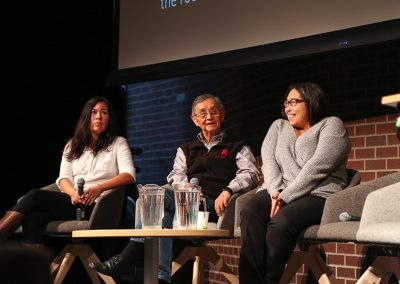 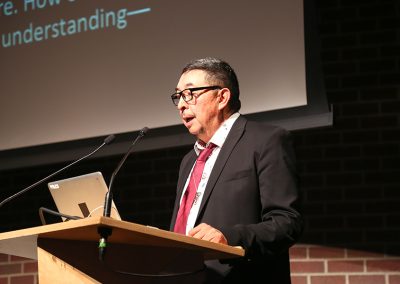 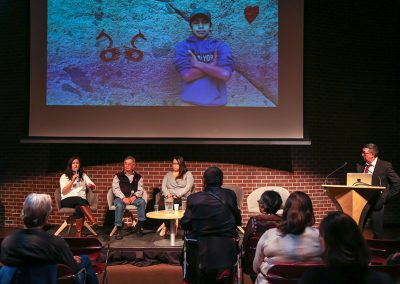 “It’s almost like a weaving. And, in the last 200 years, that beautiful, woven blanket has had so many of its strings cut by colonialism, and there was a deliberate attempt to get rid of that. I feel like we’re trying to pull those threads back together and we’re slowly weaving it back together. The language is an absolute integral part of that because it encompasses our way of knowing and being in the world.”

Marianne Nicolson is an artist activist of the Musgamakw Dzawada’enuxw First Nations. She is trained in both traditional Kwakwaka’wakw forms and culture and contemporary gallery and museum-based practice. She holds a Bachelor of Fine Arts from the Emily Carr University of Art and Design (1996), a Master of Fine Arts (2000) from the University of Victoria, as well as a Master of Arts (2005) in Linguistics and Anthropology and a PhD (2013) in Linguistics and Anthropology with a focus on space as expressed in the Kwak’wala language. Among many other incredible international venues, recent exhibitions include the 17th Biennale of Sydney, Australia; The Vancouver Art Gallery, The National Museum of the American Indian in New York.

Larry Grant is a Musqueam Elder. He is presently assisting in revitalizing hən̓q̓əmin̓əm̓ in the Musqueam Language and Culture Department, and co-teaching the introductory hən̓q̓əmin̓əm̓ course through UBC. Larry is the Elder-in-Residence at UBC’s First Nations House of Learning. He is a Faculty Fellow at St. John’s College, and the inaugural Honorary Life Fellow for Green College and is the recipient of numerous awards and distinctions.

Dr. Eldon Yellowhorn is from the Piikani Nation. He received degrees in geography (BSc ‘83) and archaeology (BA ‘86) at the University of Calgary. He received a Community Scholar Fellowship from the Smithsonian Institution in 1988 and worked with the curator for North American archaeology in Colorado. He attended graduate school at Simon Fraser University, where he studied archaeology (MA ‘93). He completed his student career at McGill University (PhD ‘02). He was a member of the design committee for the Hall of the First Peoples at the Canadian Museum of Civilization (now the Canadian Museum of History) between 1992 and 2002 when the exhibit opened. He began his academic career at Simon Fraser University in 2002. He established the Department of First Nations Studies on the Burnaby campus in 2012 and was its first chair. He is a long-time member of the Canadian Archaeological Association and served on its executive committee as President (2010–12). Dr. Yellowhorn is a native speaker of Blackfoot and has worked on preserving the language using modern media such as animation and videography. His documentaries chronicle his research on the Piikani Nation. 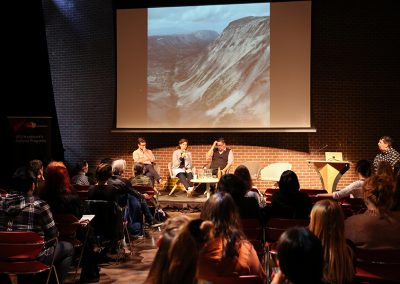 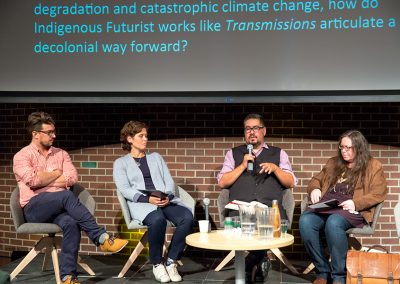 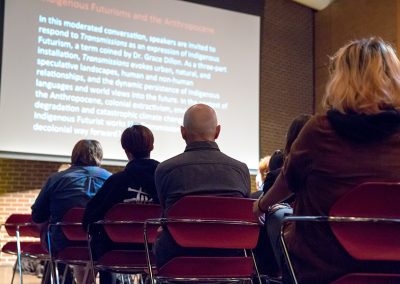 Conversation 2: Indigenous Futurisms and the Anthropocene

In this moderated conversation, speakers were invited to respond to Transmissions as an expression of Indigenous Futurism, a term coined by Dr. Grace Dillon. As a three-part installation, Transmissions evokes urban, natural, and speculative landscapes, human and non-human relationships, and the dynamic persistence of Indigenous languages and world views into the future. In the context of the Anthropocene, colonial extractivism, environmental degradation and catastrophic climate change, how do Indigenous Futurist works like Transmissions articulate a decolonial way forward?

“I continually feel like I say that climate change allows us to put a lot more on the table. But Indigenous knowledge has already done a lot of that work for us actually. And so bringing that into conversation, starting from a basis of relation gets you to a really different set of questions around how do we understand the disruption that occurred with colonialism? How do we understand the ways that humans can get back into good relations?”

Dr. Grace L. Dillon (Anishinaabe) is a Professor in the Indigenous Nations Studies Program at Portland State University in Portland, Oregon, where she teaches on a range of interests including Native American and Indigenous studies, science fiction, Indigenous cinema, popular culture, race and social justice, and early modern literature. Among her many publications, she is the editor of Walking the Clouds: An Anthology of Indigenous Science Fiction (2012), and Hive of Dreams: Contemporary Science Fiction from the Pacific Northwest (2003).

Dr. Candis Callison is Tahltan and an Associate Professor at the University of British Columbia. She is the author of How Climate Change Comes to Matter: The Communal Life of Facts (2014) and the co-author of Reckoning: Journalism’s Limits and Possibilities (which will be released Nov, 2019). Candis is a regular contributor to the podcast, Media Indigena, a member of the American Academy of Arts and Sciences, and a Pierre Elliot Trudeau Foundation Fellow.

Dr. Cliff Atleo is Tsimshian (Kitsumkalum/Kitselas) and Nuu-chah-nulth (Ahousaht), whose research examines Indigenous governance, community development and political economy. He is interested in how Indigenous communities navigate/adopt/resist mainstream capitalism while working to sustain their unique cultural identities, practices and worldviews. His postdoctoral research will look at Indigenous community development policy and the revival of traditional economic practices as well as the exploration of new practices rooted in traditional Indigenous principles and values.

Dr. June Scudeler (Métis) received her B.A. and M.A. in English at SFU and her PhD in English from UBC in 2016. She is Assistant Professor in the Department of First Nations Studies, cross-appointed with the Department of Gender, Sexuality, and Women’s Studies. Her research examines the intersections between queer Indigenous studies, Indigenous literature, film, and art. June has published articles in Native American and Indigenous Studies, American Indian Culture and Research Journal,Canadian Literature, and Studies in Canadian Literature. Her chapters are included in Queer Indigenous Studies: Critical Interventions in Theory, Politics and Literature (University of Arizona Press) and Performing Indigeneity (Playwrights Canada Press). She is the co-editor of Studies in American Indian Literatures, is currently researching Indigenous representation in Fear the Walking Dead and Indigenous horror and science fiction literature and film, and writing a book about Swampy Cree artist Kent Monkman.

Dr. David Gaertner is a settler scholar of German descent. He specializes in new media and critical technology studies. He is an Associate Editor of BC Studies and a Green College Leading Scholar. His most recent book, The Theatre of Regret: Troubling Reconciliation in Canada, is forthcoming from UBC Press in 2020. 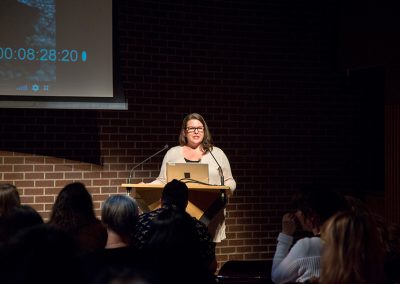 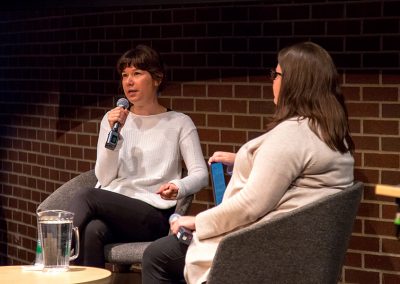 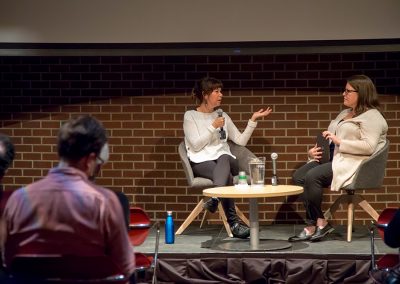 In this keynote conversation, artist Lisa Jackson joined Simon Fraser University Professor Karrmen Crey (Stó:lō) to reflect on the earlier sessions and the creative process and intentions behind Transmissions.

“One of the phrases I’ve used—‘the roots of meaning’ is one of them—but another one is ‘knitting the world together.’ It’s the sense that the world is powerful and has regeneration capabilities. And we need to remember… that if you look at the world in a certain way, you start to see that the world has agency. And if we can respect that, we gain a bit of humility around our place within creation.”

Lisa Jackson is a filmmaker and artist whose work has shown at top film festivals, exhibited in galleries, garnered awards including a Genie and Canadian Screen Award, and aired widely on television. Her films range from documentary to fiction, animation to 3D IMAX, and she’s made two virtual reality works, including Biidaaban: First Light which is traveling the world and is a sister project to Transmissions. She is of mixed Anishinaabe and settler descent, lives in Toronto, and Transmissions is her first installation. See more at doornumber3.ca

Dr. Karrmen Crey is Stó:lō and a member of the Cheam First Nation. She is an Assistant Professor in the School of Communication at Simon Fraser University, where her research examines the rise of Indigenous media in Canada, and the institutions of media culture that Indigenous media practitioners have historically engaged and navigated to produce their work. Her current research examines Indigenous film festivals and Indigenous digital media, particularly Indigenous virtual reality and augmented reality.

Kate Hennessy is a settler scholar of Irish and German descent and Associate Professor specializing in Media at Simon Fraser University’s School of Interactive Arts and Technology (SIAT). As an anthropologist of media and the director of the Making Culture Lab, her research explores the impacts of new memory infrastructures and cultural practices of media, museums, and archives in the context of technoscience. Her multimedia and artworks investigate documentary methodologies to address Indigenous and settler histories of place and space. Hennessy is a founding member of the Ethnographic Terminalia Collective, which has curated exhibitions and projects at the intersection of anthropology and contemporary art since 2009. 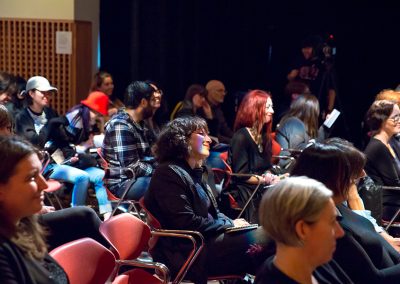 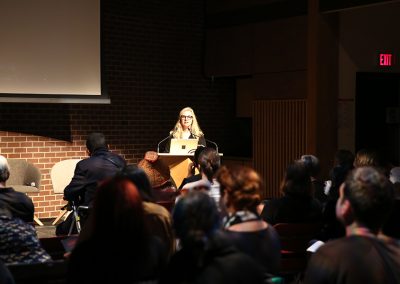 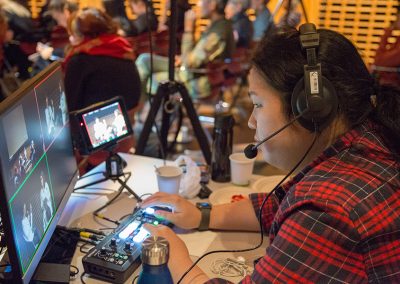 The Roots of Meaning: A Symposium on Lisa Jackson’s Transmissions was funded by the Simon Fraser University Aboriginal Strategic Initiative, in partnership with SFU Woodwards Cultural Programs. Produced with the support of Clayton Baraniuk, Electric Company Theatre; Lori Lozinski, Violator Films; and Michael Boucher, SFU Woodwards Cultural Programs. The organizers Karrmen Crey and Kate Hennessy are grateful to the symposium participants and the symposium attendees for their support of this project and conversation.